TAIL's aim is to rescue, care for, and endeavour to find homes for stray, neglected and abandoned dogs in the Torrox area of Southern Spain.

We are also actively involved in assisting with medical care and population control for the stray cats and feral colonies in the area by means of trapping, neutering and releasing.

TAIL also strives to educate the public on the importance of neutering and responsible ownership.

TAIL started as an idea in the spring of 2008 by Sue Whewell and Wolfgang Butz to help the abandoned dogs and cats in the Torrox area of Spain. By 2009 an association was in the pipeline and several more people were showing an interest in helping with the work that would be involved.

Who we are today 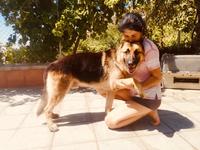 The whole operation of TAIL functions through the help and dedication of considerable numbers of volunteers, without whom the association could not exist. Our volunteers are an international group originating from many places including the UK, Spain, Germany, France, Belgium, Netherlands and Scandinavia

TAIL also has what is known as a Junta Directiva comprising of five members that oversee the governance and direction of the association. There is also a general committee which covers day to day matters.

The refuge today is totally beyond recognition from the beginning, much of the finance to improve the condition of the facilities and kennels has come from the sales of donated goods to our shops. Large funds have also been raised by Martine Decroie, one of TAIL's committee members who continues to devote herself to the refuge improvements and maintainance.

Gill moved to Spain in 2003 to run hiking holidays with her husband. Since retiring she has been volunteering with TAIL after finding a box of dumped pups. She manages the web site and helps with volunteers at the Refuge.

Our Friends and Partners

We work with a range of partners both locally and internationally in order to get dogs rehomed and fostered. These include: